I've finally had some time this week to have a look at the amazing photos and videos that were put together around the Opera Game development process that Operasonic undertook in July 2015. The Opera Game Development project is the first step towards developing a new production for Operasonic. Following the ethos of the company, and putting participation at the heart of the process, I decided to start a conversation about what the story would be for our new show - not just with the creative team - but also with 28 10 year olds from Pillgwennlly Primary School in Newport. 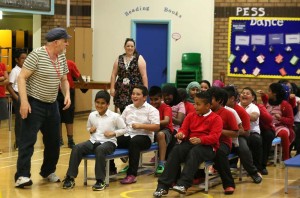 Working with writer Martin Riley and composer Stephen Deazley, we mapped out a five day process which was designed to model and enable our young creatives to explore ideas, write songs, act out scenes, sing their hearts out and ultimately become the experts who would create our story. During the five days we had to be adaptable, we had to listen hard, we had to watch ourselves in case we ran away with ideas, we had to accept a constant round of offers from the young people, and we had to make some hard decisions. I can honestly say it was the most exhausting, wonderful and surprising five days I have had in a long time. The Opera Game process - Martin Riley Interview And our young creatives did not disappoint. They created an amazing story which was certainly not the story we would have come up with ourselves. It's a complex, dark and emotional story. It's a story of a king who cannot grieve, who has frozen his heart solid. It's the story of a girl who has to find out who she is. It's a great story for the young people of the UK to hear, and it's operatic. Our young creatives completely owned the work they had made, and it was joy to see them put it on its feet and tell their fellow pupils about it. 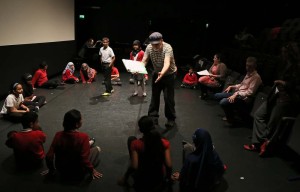 I hope you'll follow our story over the next year, as we develop this project further. Watch out for future updates. And you can watch some more of the videos we made about the process here