Aggie Cornog tells stories, dangerous and enchanting stories. Usually they end and everything goes back to normal, but this terrifying tale has come to life! It’s down in the Basement, telling itself, and can’t be stopped. That is, unless Aggie can recruit a gang of fearless story-busters to go down and sort it out! Nightmare Scenario is an edgy and immersive musical mystery. 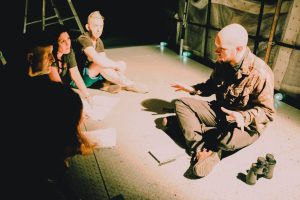 We wanted to make sure the story we are going to tell is something that young people really want to hear, so we asked Pillgwennly Primary school to help us write it. We worked with pupils in July 2015 to come up some ideas and start to construct the story.

Photos from the Development week